Vancouver Is Canada's Most Congested City - Rise Of The Burbs

Our real estate team and lower mainland residents know a thing or two about sitting in traffic, real estate and gas prices, taxes, taxes and more taxes. So, it comes as no surprise to any of us that Vancouver is Canada's most congested city complete with a plethora of serious trickle down issues.
What does that mean to those of us that live and work here? It means that our rise of the burbs forecasting is right on schedule. In fact, it turns out we know more about traffic congestion than any other city in Canada. According to TomTom’s Traffic Index report released March 31, the average percentage increase in travel time that can be attributed solely to congestion in Vancouver is 35% – a full eight percentage points higher than the national average of 27%.
At rush hour, congestion increases Vancouver drivers’ travel times by 66%, compared with 57% Canada-wide.

TomTom estimates that the average Vancouver driver loses 84 hours a year by being stuck in traffic. Across Canada, this works out to about 79 hours a year.

What is one way employers can help cut down their workers’ travel times and lost congestion-related driving hours? 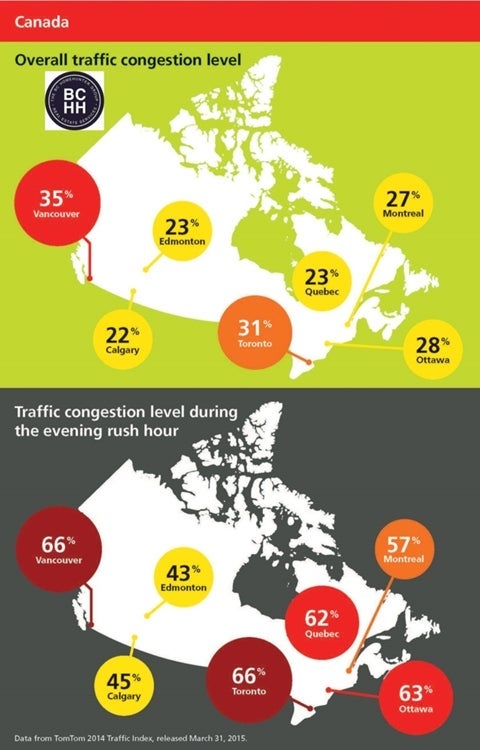 “The high levels of congestion are due in part to the traditional work week, giving people no choice but to all be on the road network at the exact same time,” TomTom said in a release.

Toronto comes in second place across Canada at 31% overall, followed by Ottawa with 28%.

Calgary drivers may be surprised to learn that they have the lowest congestion rate of any other major city in Canada, at 22%.

The study found that only one city in the United States – Los Angeles – has worse congestion than Vancouver. Angelenos’ travel time is increased by 39% due to being stuck in traffic.

Worldwide, Istanbul has the worst congestion levels, at 58%. Mexico City is in second place at 93%, followed by Rio de Janeiro (51%).

When is the worst time for congestion? TomTom found that you will likely spend the most time stuck in traffic on Thursday evenings.

These statistics may add fuel to the Yes side’s tank in the transit plebiscite currently under way in Metro Vancouver, as this side is taking the stand that a 0.5% percentage PST increase will decrease traffic in the region. Some No side supporters have pointed out, however, that a Yes win will simply lead to an increase in taxes and wouldn't guarantee that all the improvements that are being touted will actually take place.
The Yes side has not taken any of the current and future changes to transportation such as Uber. There is obviously a massive amount of social engineering and politicking taking place at the expense of home owners and tax payers.
Exhausted yet? If you are you might want to seriously considering making a move to an ideal location in "the burbs" better known as the Fraser Valley. From White Rock & South Surrey to Langley, Maple Ridge and every other corner of the spectacular bread basket of Metro Vancouver, there are outstanding opportunities now and especially the future.
Whatever questions, thoughts or concerns you might have or if your considering buying or selling any real estate anywhere in the lower mainland or British Columbia, don't hesitate to call or email the only urban and suburban real estate team on Canada's west coast, The BC Home Hunter Group, 604-767-6736.