(March 27, 2014 )
Even though the Peninsula Club is still years away from opening its doors in 2017, people from cities throughout the south of the Fraser are already clamouring to join. 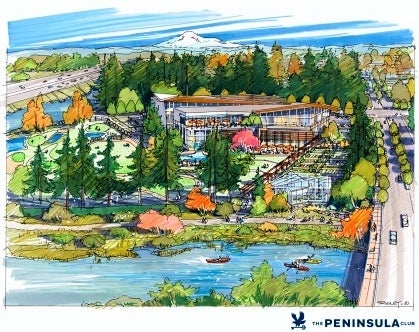 Right now the prospective site is home to a driving range and open space, but Mary Manning envisions a thriving sports and recreation centre. It's something she said she has been wanting to see since she moved here from Vancouver many years ago.
"I have been working on this, in one way or another as I say for a hundred years and one day I heard that there were two guys walking around the area thinking that they might want to do a quote unquote Arbutus Club down here in Surrey and I thought, OK, let's meet," said Manning. "We sat down and looked at each other and just realized that, between the three of us, we have the tools to get the job done so we joined forces in about 2012." Those partners - David Galtin, a former managing partner at DA Architects + Planners, and Don Redden of Redden Development Consultants - have enormous experience in building large-scale projects. They've recently been joined by Stuart Olson Dominion Construction Ltd. as the development partner.

Manning said she brings "feet on the ground experience" along with her marketing and brand management expertise. The idea for the Peninsula Club is that it will take the best of the Arbutus Club in Vancouver and Hollyburn in West Vancouver, plus some unique additions. For example, Manning said, there will be greenhouses on site, growing organic food for the "farm to fork" restaurants, NHL’sized ice facilities, indoor and outdoor pools, a fitness centre, gymnasium facilities, studios for music, dance, yoga and more, a corporate centre and racket courts. There will be ample parking, given the 16-acre site at the intersection of King George Boulevard and Crescent Road, where they have an agreement to purchase. All told, it will be a 160,000-square-foot facility. As a family-oriented club, Manning said, "It's there to inspire kids to be involved and healthy, and it's a place to develop what we call a community of family." Given the exponential growth in Surrey, and South Surrey in particular, the aim is to build community. "It's always hard to move your family to an area where you don't know anybody and it's really hard to meet them so something like this is a gathering place where you get to meet them," she said.

The first stage of the project is to open a presentation centre. Then, Manning said, the website will launch, and people can have a look at the options and ideas on the table. Once memberships begin selling later this year - at a very discounted price for founding members - people will be able to book appointments at the discovery centre, ask questions and give their input in what they'd like to see included in the building phase, which will begin once enough money has been raised for construction. "This is a 16-acre site so we have the opportunity to do something so dramatic, it's such a beautiful site," said Manning.
blog comments powered by Disqus