(March 17, 2014 )
Unless your living in a cave or perhaps a lovely seaside cottage somewhere in the Gulf Islands we are all constantly being inundated by every manner of "news" media, banking sector, developer and real estate industry headlines. 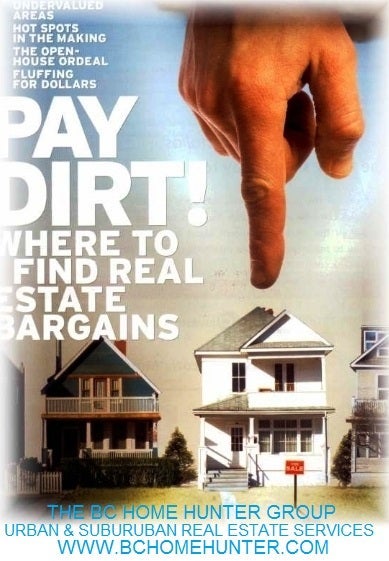 Those headlines are often screaming that either the sky is falling and a bubble is about to explode or stating the obvious that consumer debt is off the charts and not sustainable.
If you, as our real estate clients do, subscribe to The BC Home Hunter Group's, "Truth About Real Estate" newsletter for many years you too would be able to easily disseminate truth from alarmist fiction.
A new report is attempting to quell fears of a residential real estate price bubble here on Canada's west coast and Canada as a whole. Vancouver home prices have set a record as our real estate index shows prices rising for the fourth straight month.
This reports attempt to calm home owner and investor fears of a coming collapse in prices, saying the biggest threat to home valuations may be government meddling with mortgage rules, makes for an interesting read.

The paper by economist Will Dunning, who runs a real estate market research firm in Toronto, says Canadians have been mostly prudent investors in housing and that the market can absorb either higher prices or a one-per-cent hike in interest rates.

Rather than being over-valued, house prices in Canada are fairly valued and may even be undervalued, he says.

The paper was released on the same day a new Teranet-National Bank composite price index rose to a new all-time high, showing home prices rose 0.3 per cent in February.

The Bank of Canada and the federal government have warned about an over-heated housing market for several years, arguing that once interest rates start rising, the roof will cave in for some home buyers.

The Organization for Economic Co-operation and Development (OECD) has also pointed to Canada as having the world’s most over-valued housing market.

But Dunning says the OECD has been using flawed comparison between cost of owning and the cost of renting homes.

Dunning says the federal government, which has intervened four times in recent years to suppress higher-risk home buyers by changing mortgage rules, poses a real threat to the market.

The latest effort in July 2012 to slow the market had an impact equivalent to a one per cent increase in mortgage rates, he says, and has succeeded in reducing demand.

That, rather than over-valuations, is the main reason house prices could fall, he says.

This despite the Teranet-National Bank national composite price index reaching a record high for the second month in a row as Canadian home prices rose 0.3 per cent in February.

Home prices were up in all five markets surveyed in Western Canada and were down in all five metropolitan eastern markets except Montreal.

A record was set for the fourth straight month in Vancouver (up 0.9 per cent), while Calgary’s increase of 1.1 per cent helped it set a record for the first time since September 2007. Increases were also recorded in Edmonton (0.6 per cent), Victoria (0.9 per cent) and Winnipeg (0.5 per cent).

Over the last 12 months, the index has increased by five per cent, with prices in Calgary rising 9.6 per cent and Vancouver by 7.7 per cent. Toronto was up 6.1 per cent, followed by Edmonton (5.3 per cent) and Hamilton (five per cent). Winnipeg was below the average at 3.5 per cent and Montreal was up 1.9 per cent.

The Teranet-National Bank index tracks average home prices in 11 metropolitan markets based on data collected from public land registries.
If you want "The Truth About Real Estate" feel free to call or email our passionate real estate team any time. We are always available to chat with you about any of your concerns and assist you with buying and selling any real estate anywhere in our beautiful British Columbia.